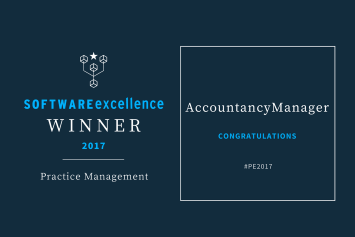 There were over 30 companies that entered the ‘Practice Management’ category, of those, 5 companies were shortlisted.

Over 1,000 votes were placed. AccountancyManager was among the 5 shortlisted and went on to win the category by achieving the highest customer rating.

In an article about the stories behind the awards, John Stokdyk, AccountingWEB’s global editor, wrote,

“But the well known names didn’t have it all their own way. Newcomer AccountancyManager came out of nowhere to nab the practice management award. Having launched the cloud-based work-tracking system for small firms in March this year, AccountancyManager has attracted more than 500 sign-ups and 150 converts in the months since according to founder James Byrne. And enough of them cast favourable votes in the poll to topple the giants.”

In an email to AM clients, Byrne wrote,

“We would like to thank everyone who has supported us so far and voted for us in the practice management category for the software excellence awards.”

Thanks go to AccountingWEB for putting on a great event.