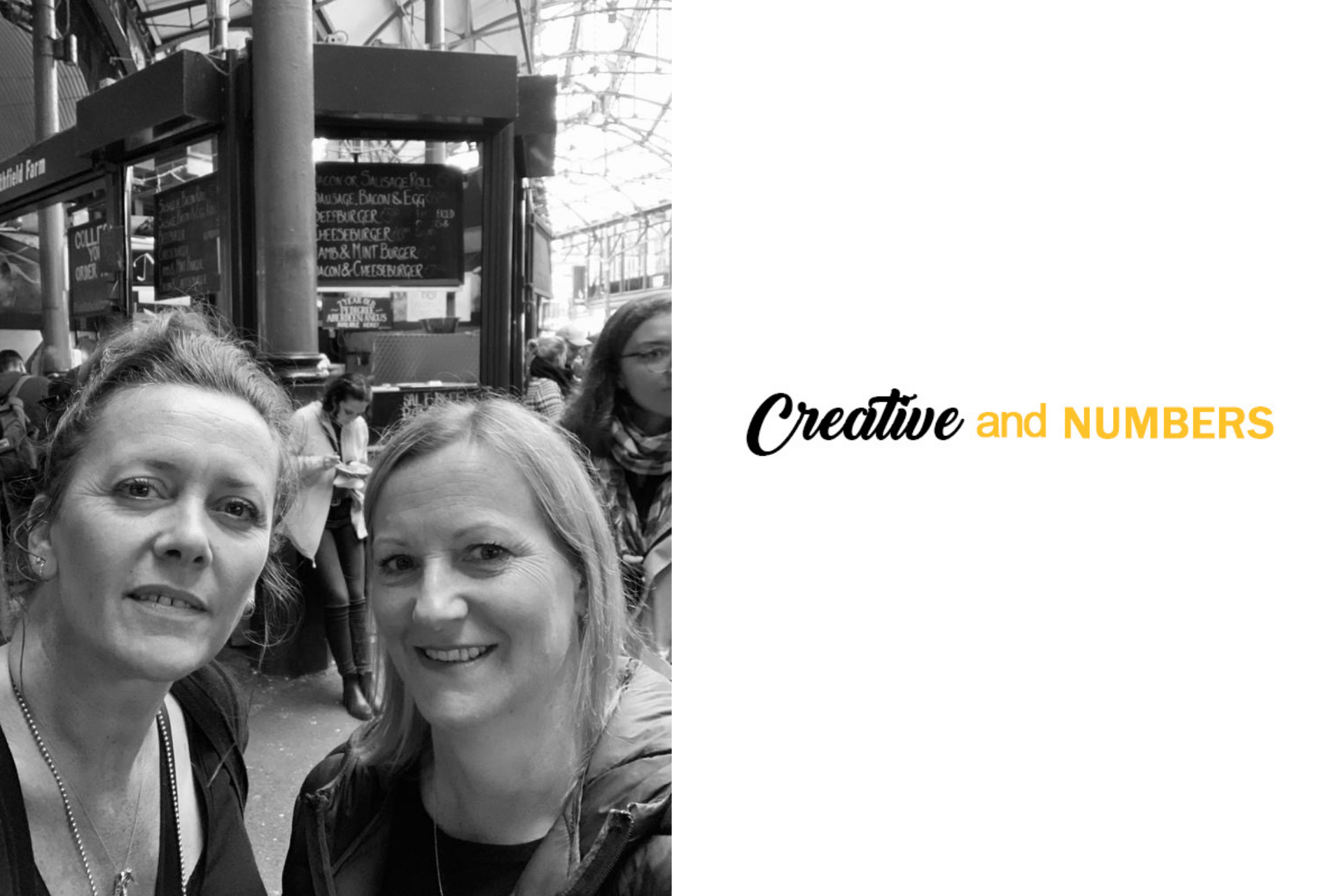 Vicki and Pippa have known each other since they were 11. Now, with their kids all grown up, they joined forces to run Creative and Numbers, a Kent-based practice dedicated to the creative industry. The female founders both hail from unlikely backgrounds and are far removed from the traditional view of a stuffy accountant. Thanks to AccountancyManager they’ve achieved their dream to work from anywhere in the world (and no weekends in January).

Neither Vicki or Pippa started out as accountants. Vicki began her accountancy career 20 years ago, while Pippa spent 20 years working in TV production before re-training and changing her career.

Vicki: I fell into accountancy 20 years ago, quite by chance. A colleague who is a chartered accountant needed some help, so I took some time off to give him a hand – and ended up leaving my job. I worked with him for a few years then got myself qualified.

Pippa: I have worked for many years as an advertising agency producer and VFX producer at post houses and television stations both in London and Sydney. So, although it was all about film and shoots, my job was also about strict budgets and money. So weirdly, having never imagined myself in an accountancy practice, actually a lot of the skills were transferable. It’s all about being super-organised, fine detail, unpicking problems and sorting things out.

When she started out, Vicki took over her colleagues sole trader clients while he focussed on larger businesses. The majority of these clients happened to be in the creative sector. So when Pippa came along with 20-years’ worth of contacts in TV production, it made sense to niche-up, as it were.

Pippa: Because I’ve worked in that industry for so long I understand things from our clients perspective. Whether they’re a director, producer, in pre-production, actual production, post-production, after effects, I understand the whole gamut. I think the fact that I can talk to them in their language changes everything.

Pippa: Many of our clients have said they are fed up having an accountant they can’t speak to, won’t take their calls or when they do speak to them, bamboozle them with confusing language. So we’ve just broken it right back down.

Their past experiences had made them very aware that accountancy was an alien world to many and they hoped to demystify the fear that so many have while navigating their accounts. So it seemed like a natural step for them to create a service that simplified the process, while being more transparent for small creative companies and freelancers.

Pippa: Creative people tend to prefer seeing a “visual” so we have created a number of documents and maps showing the client –  ‘here you are, here’s your business, here’s your personal tax and your corporation tax…’ Client’s say it’s really helpful and simple.

It’s official, January is more stressful than a TV shoot (unless you have AM)

After 18 years of manual, paper-based processes, Vicki was just starting to streamline when Pippa came on board.

Vicki: When we joined forces, Pippa said ‘This is a nightmare.’ I used to hold a lot of the information in my head. Pippa said, ‘Well it can’t be in your head anymore. It’s got to be out there, I need to know all these different deadlines.’

We looked at a couple of systems and they were just so complicated, we couldn’t work them out. Then we came across AccountancyManager, Pippa had a play and really liked it. So it was having those fresh eyes coming in saying ‘this whole system needs an overhaul’.

Pippa: We did a January… I was nearly on my knees. I mean, I’ve worked long hours on TV shoots, into the night – but I just thought, ‘I’m not doing that ever again.’ Then this year, we didn’t work one weekend in January and it was actually quite painless.

“We did a January… I was nearly on my knees. I mean, I’ve worked long hours on TV shoots – but I just thought, ‘I’m not doing that ever again.’

Vicki: For 18 years I’ve worked seven days a week every January. I literally don’t have a day off and I work long hours. This year I didn’t do any of that. Even on the last day of the month I was finished by lunch time. I couldn’t believe it, I thought ‘I might open a beer now!”

Pippa: I think the sooner you start using AccountancyManager, the better, because then you start using it properly from the start of your business. Being able to plot and plan everything out over the course of the year, as not everything is January-ended, made a huge difference.  If I’d known, obviously we’d have started something like this a lot earlier.

Vicki: I would’ve started it years ago, I’d say it’s never too early to start on AccountancyManager, even if you only have five clients, get them on there. The whole journey is so much easier.

Creative and Numbers have now established a system for onboarding clients and managing work as it moves through the practice – all centred around AM.

Pippa: We’ve got a good system going where I do much of the onboarding – proposals, letters of engagement, 64-8s, and all of that side of the process. Then I’ll change that task to Vicki and that’s the point where Vicki will do a second call with the client to start talking to them more about their actual business. So it’s a really nice flow.

Using AM’s risk assessments to get know your clients better

Vicki: What I find really useful is using the risk assessment template as a basis of getting to know our clients even better, by going through the questions with them. And it flags anything like ‘are you a cash business?’, so it’s a really good tool to learn more about your clients.

Vicki and Pippa work mainly with sole traders and freelancers that are Limited companies. So they’ve created a unique way of spreading out self assessments across the year.

Pippa: Every time we get a new client, we allocate them a month. So by the time we get to January, there’s probably only 10 people to complete, which is heaven. We have the automated reminders that go out [requesting records from clients]. So all the Self Assessment people that are sole traders are done via that month then Limiteds – we know their year ends anyway because we’ve got it in AccountancyManager.

Kudos for the Client Portal from Creative and Numbers’ clients

Pippa: It’s a safe portal and I think it looks impressive. A lot of clients are very happy that they can just log onto the portal, upload documents and also e-sign their returns.  It took a little while to get all the clients to sign up and register, but believe we’re about 80% client registered now.

Sharing knowledge from Kent to Northumberland

Working alongside Vicki and Pippa, is Karla. Based in Northumberland, Karla used to work in the TV and film industry as a finance manager. So that’s three people, with different skill sets, 400 miles apart, servicing the same clients. AccountancyManager has become a crucial part of keeping the team on the same page, without bothering each other (or clients) with questions.

Vicki: We were finding that myself and Karla do most of the accounting work in TaxFiler and we know whether a client has a student loan, rental income etc.  Pippa fields a lot of the calls and only has her nose in AccountancyManager. So we’ve created a whole new section of student loans, dividends, rental income… all these boxes we can fill in on the client file in AccountancyManager.

Pippa: Or, equally, if I talk to a client and they’ve got a student loan, I can fill that in so that these guys know as well. So we’re not going back to clients and asking questions that have already been asked.

The Client Timeline in AccountancyManager records and timestamps every email – to and from the client – any changes to the client’s information and any new documents or signatures in the Client Portal.

Pippa: With the Client Timeline, when Karla is working on the client for the first time, she can go in and check what kind of conversations and documents have been sent and received in AM.

Vicki: The timeline is great because it links with Gmail. On the odd occasion a client might say, ‘well, you didn’t say that’, then rather than trawling through your Gmail, you just go back to their timeline, it’s much easier to locate that communication in AM. So that’s really useful.

“So when you’ve got a client saying, ‘I haven’t seen/received that email’, I can see that they’ve opened it 15 times already!” Vicki

The freedom to work in Spain or Portugal or… anywhere

Both Pippa and Vicki have always dreamt of being able to work wherever they like in the world. Thanks to AccountancyManager, this is now a reality.

Vicki: What was really important for us, was to get to a point of being fully remote. We both have grown-up families – my last one just turned 18. I wanted to get to a stage where we’ve got the freedom to go and sit in Spain or Portugal or wherever and still be able to provide the same service. We’re at that stage now and we couldn’t have done that without AccountancyManager.

Gaining the time to grow your clientbase – without hiring more staff

“We can probably double our size and not have to take on any more people. We’d be able to cope with just the three of us.”

Vicki: What AccountancyManager has enabled us to do is save the time sending out paper 64-8s for onboarding and fire-fighting the whole time. We have around 200 clients and we can probably double our size and not have to take on any more people. We’d be able to cope with just the three of us, because of how we’ve streamlined everything and how AccountancyManager’s cut out so much admin.

Last week, Jonathan in our marketing team had a panic that people might think we pay our users to post nice things about us on social media. (To confirm, we don’t.) Pippa and Vicki join our ‘fans’ in commending our support team – and the speed and relevance of new features.

“The support team is lovely, they’re amazing. I particularly talk to Rachel and Liston and they’re so helpful.”

Vicki: What’s quite interesting as well is you take a problem or idea to your technical team and it gets put straight onto the roadmap. Like the timer on the time recording, Pippa said it’d be useful if you could stop and start the timer. We put the request in and within a couple of weeks that function was working.

So what’s great about AccountancyManager is you’re listening to us and making sure it’s got that functionality that’s really important to us. So that’s good. And it happens quickly as well, I’ve worked in a tech company before so I know it takes time.